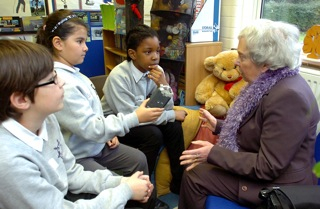 Oral History is an interactive way for young people of all ages to engage with history face to face and learn about history first hand from those who experienced it. The process of learning to do oral history and community engagement  are life-time skills.  Young people also develop the skills and confidence to speak up and ask their own questions with people from other generations. Barbara has plenty of experience in working alongside class teachers to develop tailor-made training for their classes. Interviewing topics can be about anything that fits in with the class curriculum.

Barbara trained the year 6 class in St Martin’s School in Salisbury, with the topics ‘The area I grew up in’ and ‘Toys and Games.’ The young people in this class were very excited, but nervous, at the prospect of interviewing local older people they had never met before. Nerves were quickly dispelled as they discovered many of the interviewees had attended their same school – 70, 80 years earlier. They relaxed as they became absorbed in listening and inquiring into the stories of their interviewees’ pasts. A CD was made with clips from the recordings.  A dance teacher colleague, selected some of these clips and interpreted them to create a fascinating public dance performance with the children . 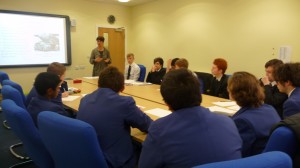 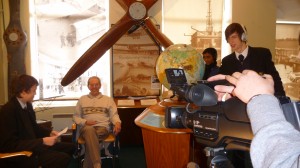 Pupils from The John Fisher Boys’ School in Purley made a feature length documentary film about Croydon Aerodrome – London’s first main international airport. It played a significant role in both World Wars. Barbara provided two days oral history training to the pupils, they also had training in film production and were financially supported by the Heritage Lottery Fund and The Historical Association. ‘Memories of Croydon Airport’ can be viewed on The Historical Association’s website here.

Schoolchildren of all ages can be trained to do oral history about any topic.

“Barbara completed a fantastic oral history project for us, interviewing people who had been involved in WW2, as part of our Wiltshire At War exhibition.”

“Barbara worked with the AONB on an ongoing project to create oral histories for the coppice and underwood workers of the AONB. She is easy to work with and creates a great rapport with the interviewees. The final product including recordings, videos and summary transcripts was created to a high standard and is a great addition to the AONBs work.”

“This course has opened my eyes to new ways of recording family history, which will complement the family tree in its traditional sense.”