The Cranborne Chase AONB are responsible for conserving and enhancing the natural beauty of the diverse historic landscape in the area – for the future. One of their tasks is to learn to better understand how to best manage the woodland for the future. Coppicing has played a traditional part in managing the woodlands in the past, but the practice is fast dying out as the work is hard and poorly paid. The AONB commissioned Barbara to record Ern Steel’s oral history. Ern is in his 70s and as a young boy he lived at the Larmer Tree, a part of the Rushmore Estate where his father worked as a woodman.  He told her that he has spent most of his life in the woods coppicing hazel, using the skills his father and others taught him as a young boy. In those days there were about fifteen to twenty self-employed men who used to coppice on the estate. Ern makes  spars for thatching and hurdles from the hazel wood. Oral history tells us how people thought and in his recording he gives his firm opinions on how and why he thinks that woodland management has deteriorated in his time and the effects of climate change on the trees. His interview will be used to help inform woodland management practice in the future; it is also archived as a record of the past for the future.

Extracts From Ern’s Life As A Coppice Worker

Barbara was also commissioned to record the fascinating stories of people who still use traditional methods to make crafts using wood, whilst at the AONB Cranborne Chase WoodFair. These included furniture-makers, clog-makers, hurdle-makers and other crafts. She also interviewed Owen Jones. 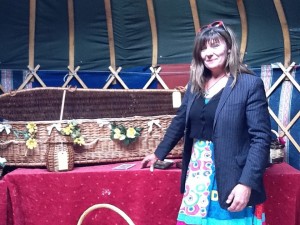 Cath Pratley was also interviewed. She makes willow coffins, cradles, baskets and many other products.

‘Apprentices’ from the  Cherry Wood Project were interviewed too. They displayed their woodland crafts and skills.

IF YOU ARE INTERESTED IN COMMISSIONING AN ORAL HISTORY

“I am so pleased I asked Barbara to record my life story. She asked me some very insightful questions which triggered off many more memories that I had long forgotten. She is very easy to get on with. I am more than pleased with the result and I highly recommend her.”

“I am absolutely delighted with the beautifully bound transcripts incorporating our family photographs and the matching bound 6 CDs in a slip cover. The quality is even better than I expected. It is something of Ma we’ve got forever. Being immigrants we’ve lost our sense of culture and this makes it very real. It has helped us connect more with our mother and explains so much about who she is.”

“When my wife died in 2002, my son was approaching his 3rd birthday and I realised as he became older he would want to know what kind of person his mother was. I decided to document the memories of mine and others who had known her. I found Barbara, we discussed ideas. She came to the ‘celebration’, a gathering of family and close friends and recorded shared reminiscences and those who wanted to make a private contribution for my son. She also did private in depth recordings with her closest friend and sister. Barbara was respectful, discreet and sensitive. I now have a set of excellent CD’s and archival CD’s. Labels and covers designed from our treasured photographs. Produced to a very professional, high standard. My son and I will enjoy these for years to come. I would fully recommend Barbara’s services to anybody.”